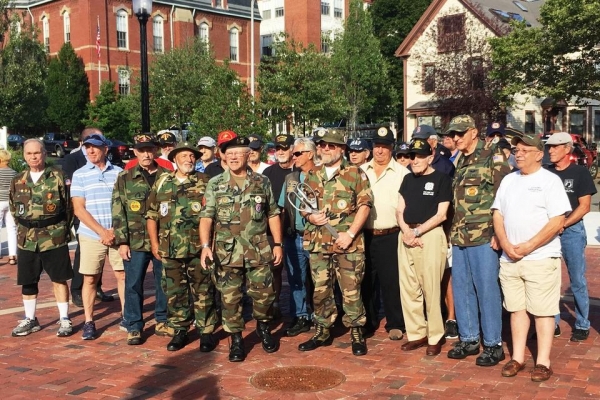 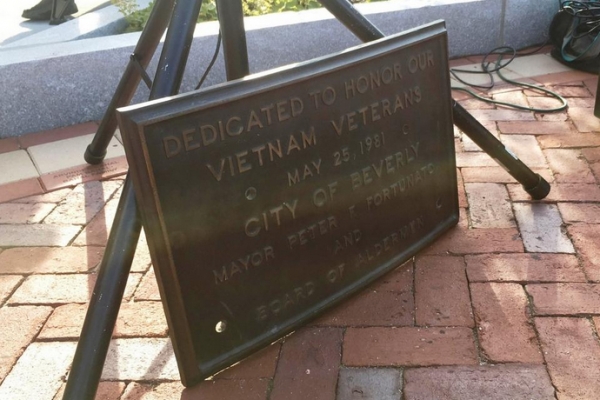 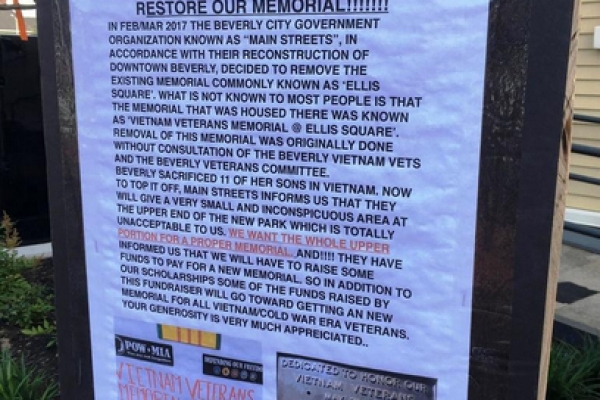 A large contingent of veterans, along with their friends, family and other community members, gathered at Ellis Square last Friday to commemorate the re-opening of the reconstructed downtown space.

Chuck Clark, commander of the Beverly Veterans Committee, spoke briefly about the history of the location.

“As a kid growing up in Beverly, I remember this area quite a bit different than it is today,” he said. “There was no park here, no plaza here. Essex Street out here was a two-way street. And right over here where The Golden Hanger is, was Goodwin’s Store.”

He also recalled that the location was a main bus stop for all the communities of Beverly.

“It was a very, very busy place here,” he said.

Ellis Square was dedicated in 1921 and named for World War I veteran Henry Gordon Ellis, a member of the 101st Field Artillery Yankee Division and 51st Artillery Brigade who was killed in action Aug. 1, 1918.

“Unfortunately, we were unable to uncover any other information on him, but way back when, they knew him and that’s why it was dedicated,” Clark said.

The draft office was also housed above the store that is now The Golden Hanger, and it overlooked the square.

“If you were drafted, you were in for two years, usually in the Army, but occasionally in the Marine Corps.,” Clark said. “And you didn’t have much choice in there.”

“We were told by the city at that time that, later when money was available, we would get a better monument here,” Clark said. “Recently, Main Streets thought the park was underused, underutilized, which it was … They raised a lot of funds and they rebuilt this plaza, which is a beautiful area right now. The only thing that’s missing right now is a monument for our Vietnam veterans and our 11 fallen brothers that gave the ultimate sacrifice.”

Beverly veterans agent David Perinchief said he has been working with other city officials to make sure that missing piece is replaced.

“The city of Beverly has now announced a competition that’s being put on in the artistic community to come up with a plan and design for the Vietnam Veterans Memorial,” he said. “It was going to be in this tiny little area in the corner, but, through persuasion and a lot of communication back and forth between the city and the veterans, they were influenced to allow our use of this whole area.”

Historical information about the space is one of the criteria that artists must incorporate into their design.

“That way, future generations when they come to this plaza, will be able to read about what it really means,” Perinchief said.

The City of Beverly, Beverly Veterans Advisory Committee, Beverly Vietnam Veterans Inc. Post #1 Stephen H. Doane and Beverly Main Streets announced the opening of a design competition of a new distinct public art sculpture at the Vietnam Memorial Plaza at One Ellis Square. This call solicits artists to propose a unique design representing those who served in the United States Military and the significance of the specific location at Ellis Square.

The design should include the names of those Vietnam veterans who were killed in action, history of the site’s significance and historical information on the Vietnam War.

The memorial is the second phase of improvements to the plaza.

Earlier this year, work was completed on a $367,000 renovation to the plaza, funded through grants, private donations and the City of Beverly. The improvements included new brick, granite, concrete, landscape and light improvements, as well as new benches. The memorial will complete the improvements scheduled for the plaza.

Deadline for submissions is Oct. 6, at noon. A committee will review those submissions, and a winner will be announced on Nov. 10.