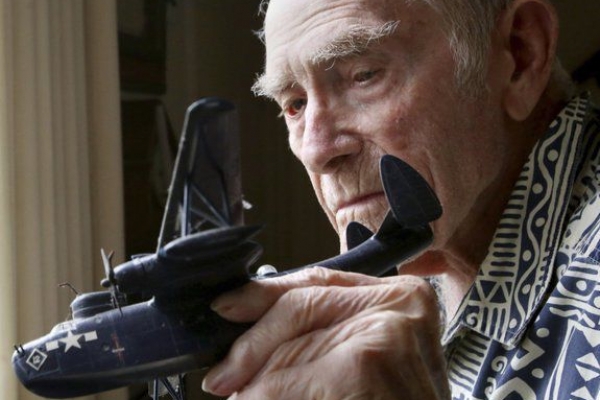 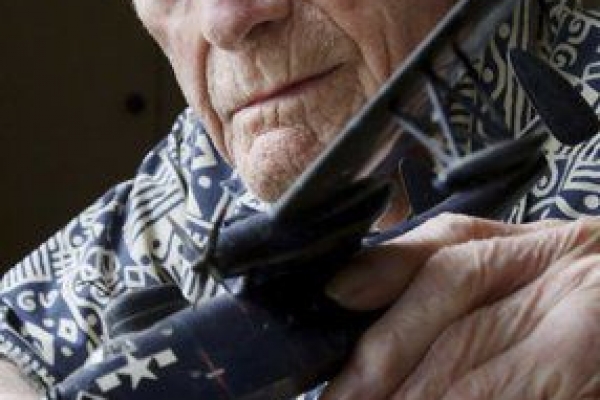 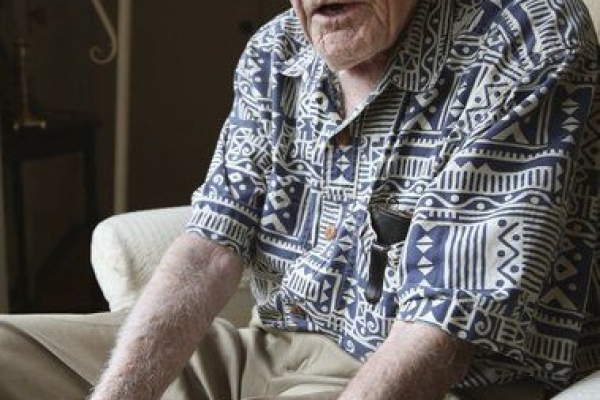 BEVERLY — When Hardy Prince enlisted in the Navy at age 22, he told officials he wanted to fly. That was 75 years ago, in the middle of World War II.

Prince, now 98, is Beverly’s oldest living veteran, according to city records. He and a handful of other World War II veterans are being honored by the city during Monday’s Memorial Day remembrances.

Prince, who was born and raised in Wenham, isn’t the only Beverly World War II veteran with a flying background. Bill Mahoney, 90, Beverly Regional Airport’s commission chair, also worked on planes during the war.

Sitting in a comfortable armchair in his home near Lynch Park, Prince holds up a model of the plane he co-piloted during the war — a Martin PBM Mariner. As part of a 13-member crew, he would fly off the coast of one of the Philippine islands where they were based in 1944 through early 1945, searching for Japanese submarines in the South China Sea.

The plane, which had floats to land on the ocean with but no insulation, was equipped with eight .50-caliber guns. The crew would go out on eight-hour patrols, Prince said, though 14-hour shifts were not uncommon.

“It was a little loud, but you kind of got used to it,” he said of the plane.

Two of the guns were in the front, two on the top in the middle, and two in the tail, Prince explains, pointing it out on his model. There were also two more guns in the middle, one on each side.

“The reason we had to do this was to hold down the submarines,” Prince said. The submarines could stay submerged for only so long — eventually they would need to surface to recharge their batteries.

Prince said there was a kitchen, complete with a stove, sink and table beneath where the pilot sat.

“Unfortunately we never had a good cook and it was barely palatable,” he said.

Prince recalled the extensive training he went through to be able to get behind the patrol bomber’s controls. He was helped by the flight experience he had both at the Beverly Regional Airport and a flight club in Lowell.

After some book learning and physical training following his enlistment in 1942, he was sent to Naval Air Station Glenview in Illinois. There, he flew one of the bright-yellow biplanes used for training. The cockpit was open; Prince was required to wear a helmet and goggles.

“One time, they said ‘OK, you’re going to try to do some night flying,’ and I thought it was going to be kind of difficult, but it wasn’t,” he said. “I flew out over the lakes, the moonlight was shining on the lower wing. It was just a beautiful time.”

The biplane training lasted for 18 months, Prince said. He was then sent down to North Carolina. He called his girlfriend, Priscilla, and asked her to come down and marry him. She took a train; they were married the day after her arrival and lived together on base.

It was soon afterward that Prince was sent to the Philippines. Though he said he never saw a Japanese submarine while on patrol, his crew’s plane crashed into the ocean once.

They were flying low, he said, when suddenly the plane flipped over. Two of his crew members were killed, including his copilot, Prince said. He escaped with a burn on his arm.

The Philippines were hot, he recalled. Prince said he and the other men would sometimes quickly cool off in the shower and rush back to bed, hoping to fall asleep before becoming hot again.

Prince was soon sent home to the states after the crash, he said. He was stationed in Corpus Christi, Texas. There, his wife joined him again on base.

Prince was nearly made a patrol commander, but it didn’t happen.

“Suddenly the war was over and we had to go home,” he said.

Prince turned to aviation again upon arriving home. He worked at Beverly Regional Airport as a mechanic. But with a growing family, he moved onto Massachusetts Institute of Technology, where he spent his career as a welder.

Mahoney’s track through the war was different — he was also considerably younger than Prince, enlisting in 1944 at the age of 17.

“You went out of high school,” he recalled. A Dorchester native, Mahoney joined many other young men doing the same thing. “There was a tremendous amount from the Boston area.”

Mahoney was made an aircraft mechanic, he said, and later became a crew chief with the Marines; he served for two and a half years.

Mahoney spent seven months in occupied Japan, he said, at an air station outside Tokyo. Since the war was over, they had to fly the station’s 14 planes back to the States.

Japan to the West Coast was a long trip for planes at the time — Mahoney and crew were responsible for a Curtiss C-46 Commando, a transport plane. To get the plane across the ocean, it had to fly with extra fuel tanks inside.

“The biggest thing was going from Honolulu to the West Coast,” he said.

Mahoney, like Prince, also continued in the aviation business, though he went on to the engineering side.

He worked for General Electric after he got out, he said. Jet engines changed everything.

“When I went to GE in 1948, they were starting the first jet engine production,” Mahoney said. “I really saw the difference going with GE, it was the jet-engine age.”

Remembering Beverly’s oldest veterans is important, according to David Perinchief, the city’s veterans agent, and Jerry Guilebbe, president of the Beverly Veterans Council.

“The oldest guys are the ones, they remember the ones who are gone,” Perinchief said. “The oldest guy remembers most of them. He’s the one carrying that generation’s memories.”