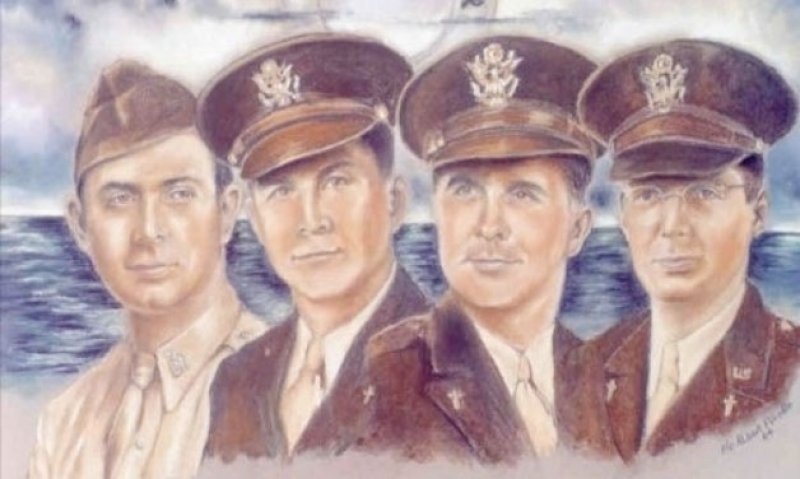 American Legion District 8, Beverly Veterans Council and the Michael J. Cadigan Post 46 members and auxiliary will honor the Four Chaplains on the Seventy Seventh anniversary of the sinking of the Troop Transport ship USS Dorchester. The program will take place at the Hastings House on Oak Street( across from the commuter rail station in Beverly Farms) at 2:00 PM February 2nd. All are welcome , a light lunch will be served after the program.

KEARNY, N.J. — Each year on the first Sunday in February, St. Stephen’s Roman Catholic Church here rings with the remembrance of a selfless act of valor now 75 years old.

On Feb. 3, 1943, the U.S.A.T. Dorchester, a military transport ship carrying 902 American servicemen and civilian workers, was torpedoed by a German submarine about 100 miles off the cost of Greenland. In 18 minutes, the ship would be lost under the frigid sea.

Panic ensued. The sailors who were not killed in the explosion or trapped below rushed to the decks, where some of the lifeboats had frozen to the ship, survivors recounted. But four chaplains standing on the decks remained calm, distributing life jackets. When the supply ran out, the chaplains gave the sailors their own.

Only 230 men survived the sinking of the Dorchester, making it one of the worst naval tragedies for the Americans in World War II. Witnesses recalled seeing the four chaplains standing with arms interlocked, each praying in his own way, as the ship sunk. They were Catholic, Jewish and Protestant: Rabbi Alexander D. Goode, the Rev. George L. Fox, a Methodist Minister, the Rev. Clark V. Poling of the Reformed Church in America, and the Rev. John P. Washington, a Roman Catholic priest.